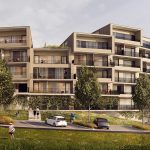 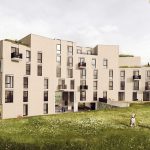 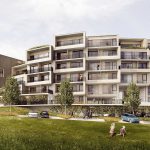 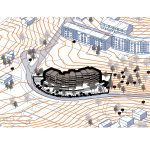 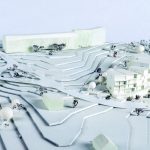 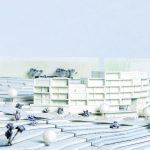 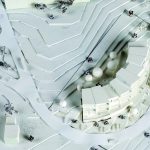 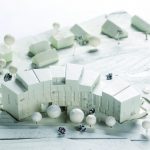 Building plot is located in an urbanized district of town near the zone of family houses and flat-buildings. Proposed design tries to naturally incorporate the object into its surroundings and to preserve the original atmosphere of a place as much as possible. A situation of a building has been influenced and inspired by an existing terrain morphology and therefore the concept keeps up the original views to the city and to its close surroundings.

Specific shape of the plot and a local infrastructure, has determined a placement of the architecture. A construction of a mass has been designed according to an irregular rounded plot as a compact line structure that is also parallel to a road curve. Due to this concept, the distance between the building and a communication/plot line is sufficient. Considering a local topography, the mass is shifted and naturally incorporated into the ground. An aperture in the architecture functions as a passage that smoothly connects the communication with an inner courtyard.

The architectural morphology of the building is based on an idea of cutting whole facade into few smaller parts. The aim was to create a harmony with smaller buildings and family houses in a neighborhood. Architecturally attractive gradation of the height of a mass responds to the terrain and the proportion requirements defined in a site plan. Precisely designed and still simple linear building offers to its potential inhabitants beautiful views and adequate sunlight for each flat. Moreover, each apartment is enriched with at least one exterior element (front garden, loggia, balcony, terrace). The object has a polyfunctional parterre with three smaller stores. Parking places and cellars are situated on the second underground floor.

In terms of economy and desired fast progress in construction works, the main building elements of whole apartment architecture are designed of a reinforced concrete skeleton and a brick masonry.

Disposition of this sectional apartment house is basically designed of three cores around which are situated usually 4 flats per floor. Luxury two- to four-bedroom apartments are situated on the top floor with their own large roof terraces included.

The facade materials are a combination of a structured gray-brown rendering, architectural concrete and stainless steel cables for climbing plants. To create a contrast, the windows, doors and a sheet covering are designed in black colored aluminium. All windows are designed without any ledge.

Compact, simple and naturally structured architecture of the apartment house has the expectation of the benefits for the city and we believe that proposed architecture has a potential to became an example for further construction in the region.