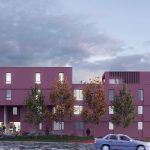 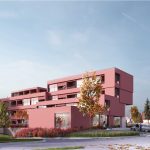 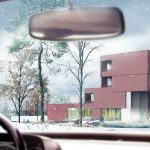 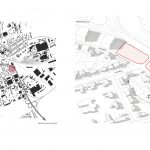 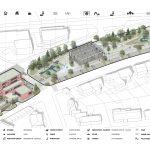 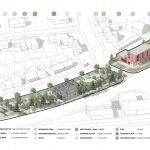 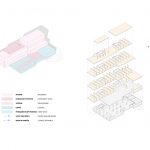 The design of the apartment building is situated in the cadastral area of the city of Trnava, by the main communication artery directly connected to the R1 expressway. There is currently a football field and technical infrastructure on the plot – a DN 400 heat pipe with a protection zone of 1 m and 3 m from the outer border of the pipeline. The locality and technical infrastructure were the main determinants of the settlement of the building, which then reflects on the completion and continuation of the existing urban structure. The subsequent architectural composition of the building is based on local morphology and creates new spatial connections to the surrounding area. Reflecting and completing the urban structure with the creation of a semi-private space for tenants’ leisure activities has become a priority of the entire design.

The mass of the apartment building is designed as a noise barrier, which orients its main facade to the south. This creates a precondition for the optimization of passive solar gains in the living and daily spaces of rental apartments with a direct connection to the exterior. The height of the building reflects its immediate surroundings and creates a smooth transition between the development of family and apartment houses. The created corner is designed as an accent of the architectural composition. It creates the impression of openness of the created space for civic amenities, which is a part of the dispositional composition of the building.

The longitudinal and transverse cant of the building plot made it possible to design a partially recessed floor into the terrain. This step allows to lighten the surroundings of the apartment building from static transport and to focus on the short-term static transport of visitors and the implementation of leisure activities for tenants as well as residents of the surrounding area.

The architectural shaping of the building is based on the need to divide the facade into smaller parts for compliance with smaller buildings in the area. The height gradation reacts to the terrain, respects the local zoning plan and creates an architecturally attractive design. It underlines and captures the essence of higher living comfort with a higher floor level. The simple linear mass of the building was gradually shaped to create possibilities for better natural lighting of the apartments with the optimization of the noise level and dustiness of its immediate surroundings. Exterior with better acoustic parameters in the immediate surroundings of apartments with less dust is the basis of healthy housing and functional sustainability of the proposed building. Each apartment is complemented by one exterior element (loggia) and the roof of the building is designed as a community terrace. The building is complemented by a multifunctional ground floor with the possibility of one larger or two smaller rent spaces. Car parking together with docks and technical equipment is situated within the underground floor.

A garage with parking spots for the inhabitants of the apartment building, together with docks, a laundry room, a drying room and facilities for a rent space on the ground floor, is located underground below the level of Nitrianska Street. In the part of the existing four-floor apartment buildings, the terrain is rising. From this level, the entrance to section A of the apartment building is proposed within the 1st underground floor. Subsequently, at the level of the crossroad of Nitrianska and Šípova streets, there is an entrance at the level of the road on the 1st floor to section B and rent space – space primarily intended for a café.

The categories of one-room and two-room flats are represented on each floor. The mass of the object grades upwards, expanding by 100 mm on each side. The higher the floor, the slight increase in the floor area of ​​the apartment. On the 4th floor, a community space is proposed in the recessed part, the so-called community terrace with the possibility of sitting, grilling, relaxation as well as the option for growing vegetables and fruits in raised pots.

The individual masses of the apartment building were shaped and gradually optimized in terms of the possibility of a prefabricated system for wooden buildings made of large-format CLT panels. The great advantage of building from a system of wooden CLT panels is ecological construction, speed of construction (comparable to panel construction) and saving space for housing. A significant plus is the dry construction process is that it allows to build even in winter, which is a considerable benefit.

Landscaping in the given area is proposed on the growing terrain and roof structures. In total, the concept of greenery is divided into 2 functional areas based on the division of the area, which is divided into two parts by road.

The first area – includes greenery around the apartment building based on the terrain and greenery on the upper floors, which is based on roof structures. From a functional point of view, it is a green area, which includes a dominant tree floor formed by deciduous tree species and a bush floor, which captures dust and noise on the road on Nitrianska Street. For the aesthetic effect, especially in areas near the apartment building and roof structure, flowering perennial beds are designed in points, which will revive the space of the apartment building with their seasonal variability and support the representativeness of the entrance and rental space on the 1st floor. A community garden has been designed on the 4th floor, consisting of elevated utility beds. The design also includes vertical greenery, formed by climbing plants crawling along the facade of the underground floor and walls.

A smaller city park with greenery with a recreational and hygienic function is created on the second area. To increase safety and reduce noise and dust from Nitrianska Street, a dense strip of tree planting is designed along the outer perimeter. The dense strip consists of a mixture of deciduous and coniferous tree species. The sub-plan is formed by an herbal floor supplemented by points of bushes creating a visual barrier to communication. In order to support the retention of rainwater, in addition to the water-permeable materials of the paved surfaces, 2 areas of rain gardens are also designed, into which water will be drained from the apartment building, paved surfaces and a multifunctional playground. Such areas are an important element of blue-green infrastructure that improve air quality and promotes species diversity. Perennial flower beds are point-designed for diversification. The green areas between the parking lots are planted with bushes and the dominant element is the alley planting of trees creating the necessary shading.

The design and distribution of vegetation elements reflects the situation, climatic conditions and supports the biodiversity of the area. In the next stages of the project documentation, a species composition corresponding to the conditions of adaptation to climate change will be proposed. The creation of smaller parks in urban structures and their involvement in the system of green urban oases has a significant effect on reducing the overheating of cities in the summer months.