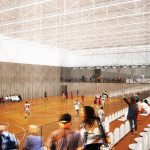 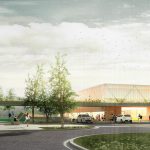 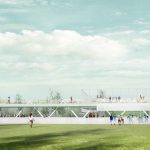 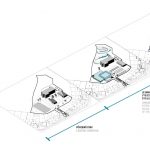 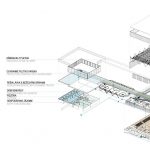 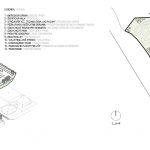 Main goal for the proposal of site ul. Alviano – Vajnory is to lead the concept as one compact unit. The spatial arrangement of each feature is based on the natural integration of new buildings into the existing structure of the municipality. Respect for the stabilized part, family houses, led to the division of functions in two volumes, which are connected by a colonnade.

Placing of building determined the position of access to land, the necessary overall height of construction and physical properties of the environment. Onset main axis functionally separates pedestrian access from car traffic. Important par of design task was to maintain an overview of the countryside with the overall perception of the functions of the sports complex. The exterior playgrounds and sports hall are considered as dominant features of the entrance. The peripheral wall is opened and protruding into the space what makes the sports hall more open and leads to the interior. The proposal operates with a human scale, which resulted in a comfortability of whole object.

Mutual arrangement of the components allows it to develop the square, which serves as parking for cars. Public space shaped by a colonnade is connecting different functions and allows visitors to move easily. The colonnade with a foot trafic roof devides the area into two separates parts – the public one with parking and square and the semi-public space with the track BMX, multifunctional playground and recreational area.

Smooth transition from public to private parts is depicted in the architecture as a material solution using concrete, perforated metal, steel mesh, glass, polycarbonate and the like. The transition from transparent to translucent screen through the rigid elements are the main features of the proposed composition.

Overlaps of the construction, offset shielding elements and embedding structures in the ground helps meet low-energy and passive energy conditions. The concept is based on making the most of energy passive use of the area, thus reducing the need for artificial lighting in the sports hall and ensures the stability of the overall energy in environment. Heating is solved with heat recovery via regenerative power supply unit, by a heat pump. To the entire heating system it will also be involved cooling unit for the ice rink.