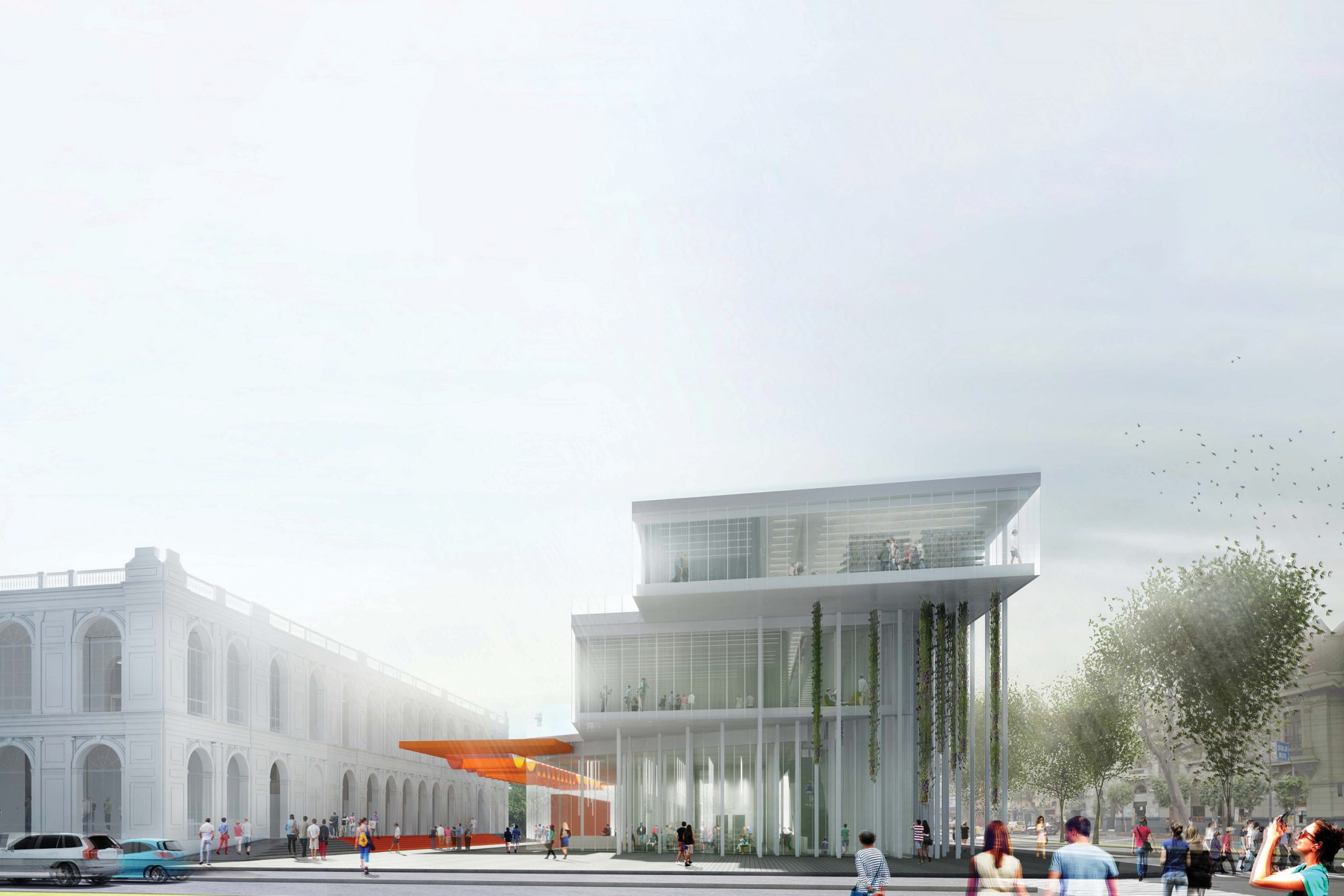 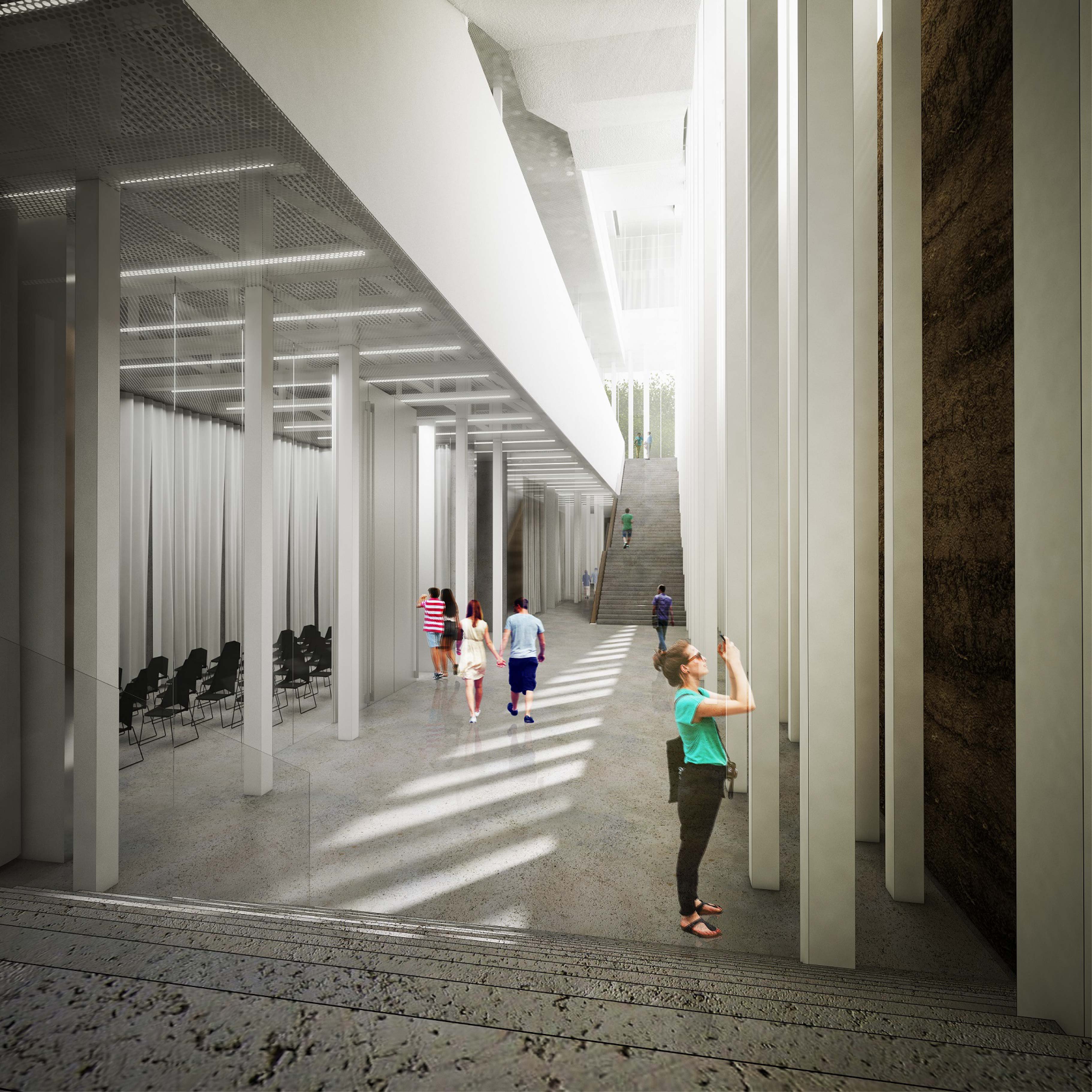 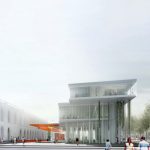 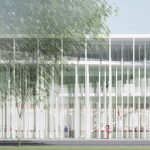 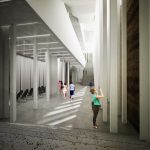 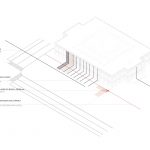 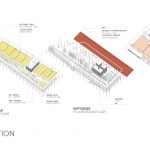 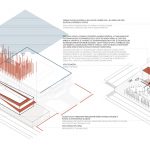 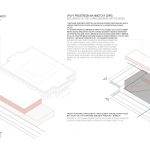 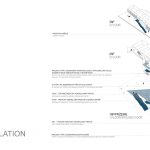 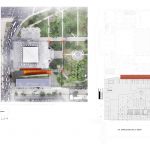 A / Urban proposal
The thesis of the concept was to create valuable public space between the new contemporary art wing and the existing historical parts. The proposed building consists of three units: a square, a covered square and a covered transition from the square to the park. Mass division and the chosen materials do not suppress the historical landmarks of the region; on the contrary, it was intended for symbiosis with the environment. The proposal does not intervene with the current structure of historical architecture. It respects the existing proportions, height, and works in human scale. The new wing functions as a volume complement of the existing museum in Mali. The ground floor naturally blends in with the public space and creates a fully functional unit.

B/ Architectural design
The main motive of the proposal is based on the transformation of the existing structure of a historical building’s facade into a modular grid – a principle also visible on the urbanist level. The first two floors respect the differences in altitude of the original building, which make the concept visually holistic. The gradient in volume towards the street enhances the open space between buildings. A visual game of static haze of vertical elements is concentrated towards the street and defines the semi-public space of the museum.

The material base of the construction is reinforced concrete. the basement is designed with earthen walls to better maintain the necessary microclimate and humidity. The facade is constructed with double-layered glass with self-cleaning system. Roof structures are formed by green areas. On the upper floor, there are photovoltaic cells, which also provide natural shielding.

A functional division of space resulted from the operating diagram. Ground floor includes the main dispersion area with an information desk, a souvenir shop, sanitary facilities and a little café. Glazing in all directions visually connects the interior with the exterior, thus evoking the accessibility of public spaces. The main expositions of the gallery are located on the underground floor along with the storage of artworks, stands and installation equipment. These areas are highly flexible: cross walls allow the highest variability of layout. The two upper floors consist of study zone and sanitary facilities. Most rooms are separated from each other by glazed soundproof walls. Privacy is ensured thanks to sliding curtains. Only one part shows as a perfect enclosed cubus – a sanitary node passing through all floors, with a mirror finish. This move has a deeper meaning from the perspective of the street – contours of historical buildings can be seen through the transparent building parts.

C / Ecological concept
Double glazed facade with self-cleaning system reduces smog penetration in the area and therefore helps maintain microclimate in the building. Optimal microclimate in the building will be provided with heat recovery via recuperation unit supplied by heat pump. For its operation, the energy from photovoltaic panels are placed on the roof (1500 m2). Due to the lack of drinking water we proposed also a water recycling system with recuperation and filtration units to reuse „grey water.“ The first draw of water from the public duct will be used for showers and basins, followed by filtration and recycling for flushing the toilets or pissoires. The purified water is later reused for irrigation of extensive green roofs. This way, the water is naturally returned to landscape. The whole concept is also complemented by air filtration system using nanotechnology applied on the facade, which works thanks to photocatalytic chemical reactions.